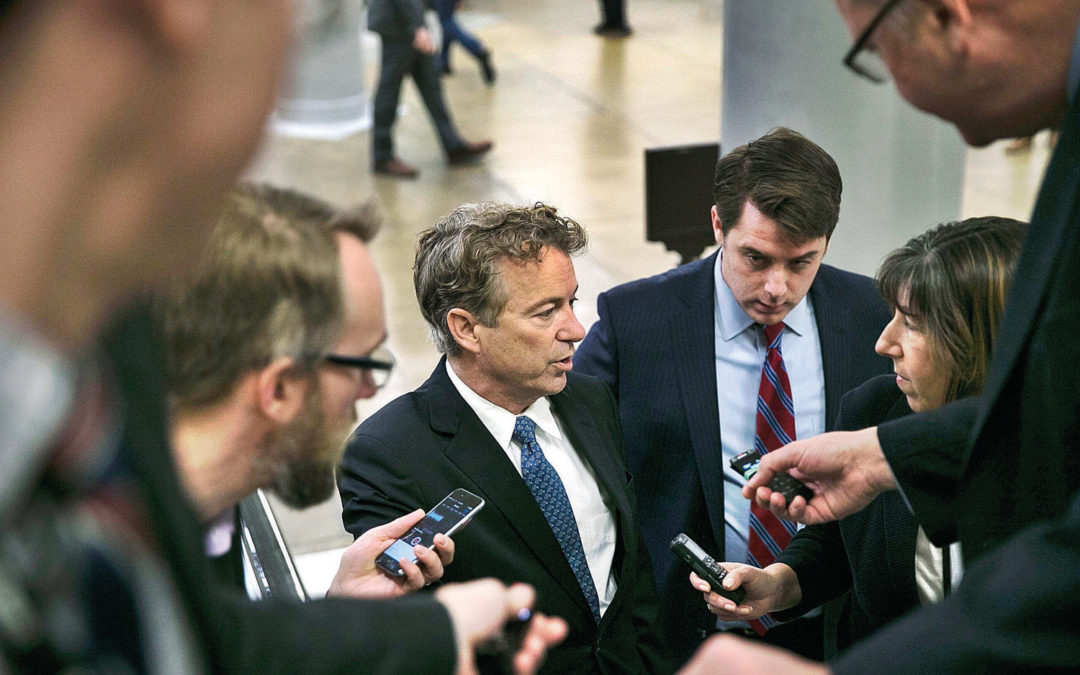 Help us, Rand Paul. You’re our only hope.

Republicans campaign on fiscal conservatism. They rally around conservative movements that aim to limit the scope of the federal government’s ever-expanding power. They propagate the Convention of States and lock arms with Tea Party Patriots. They run on cutting taxes, spending, and bureaucracy.

But rarely do they live up their promises.

On the early morning of Feb. 9, Congress passed a bipartisan budget bill and sent it to the president’s desk to sign, This follows the Tax Cuts and Jobs Act, which the president signed into law in December last year. Sixty-seven Republicans voted against the budget bill, claiming it wasn’t conservative enough. Leading the charge was Sen. Rand Paul.

The Kentucky Republican held up the vote under Senate rules, causing a short-lived government shutdown.

“If you were against President Obama’s deficits and now you’re for the Republican deficits, isn’t that the very definition of hypocrisy?” he said on the floor of the Senate.

The establishment in Paul’s own party — which oddly included President Trump — attacked Paul for forcing the shutdown.

The problem is, Paul was the only one standing up for conservatism.

For several months, the leftist talking point has been that the Republican tax cuts would lead to a $1.5 trillion addition to the federal deficit. (When the words “tax cut” enter the political atmosphere, Democrats suddenly become fiscal hawks.)

Nevertheless, despite the intellectual dishonesty in the implicit idea that letting people keep their own money is somehow theft, the Democrats were correct in pointing out that without a spending cut to follow, tax cuts would lead to a substantially larger deficit.

Striking a compromise between the military hawks and the welfare advocates, the budget deal raises spending caps on both defense and domestic spending by $300 billion over the next two years. And without increased taxes to fund the spending, the deficit will only grow.

Rest assured, Paul is not in favor of increased taxes — but precisely the opposite. He is simply smart enough to recognize that it is hypocrisy to cut taxes without even attempting to offset it by cutting spending by a corresponding amount. The result of such a refusal to cut spending will manifest in the burden of debt and repayment being shoved onto the children of those who created the problem.

Paul raises concerns about Congress’s constant failure to obey its own budget caps and about the astronomical increases in government spending — in the opposing party, welfare spending, and in his own party, military spending.

Republicans campaign on spending cuts when Democrats have the power, and then when they win back the majority, they advocate for military spending increases.

Paul rightly points out that the only way to pass increased military spending is to compromise with Democrats and give in on welfare spending. The result reached, time and time again, is no spending cuts at all. Period. What we get instead is a twofold increase in government spending. Sorry, kids!

“I think one of the questions the Republicans, I think, are not willing to ask themselves is, can you be fiscally conservative and be for unlimited military spending?” Paul told CBS.

Just signed Bill. Our Military will now be stronger than ever before. We love and need our Military and gave them everything — and more. First time this has happened in a long time. Also means JOBS, JOBS, JOBS!

In an interview with radio host John Catsimatidis on New York radio station AM 970, Paul pointed to a particularly amusing (and/or disheartening) example of government waste. Last year, he said, the government spent $700,000 studying one word Neil Armstrong said when he landed on the moon.

Conservatism is severely lacking in the Republican Party. No longer is it a core tenant but a talking point, a tool used first to get elected and then to cower behind when the going gets tough.

To tell voters that they can pay less taxes while simultaneously receiving more government benefits is a lie. Nothing is free, not even to voters. It will be their children and grandchildren who will bear the burden of payment for the debt their representatives racked up in their many, many long years in Congress.

That is the opposite of personal responsibility. That is cowardice.

The U.S. will reach trillion-dollar deficits in the coming future, and Republicans will do nothing to stop it. In fact, without more leadership in the form of Rand-Paul Republicans, they will only add to it.