Sandblasting the Past: The Confederates on Stone Mountain 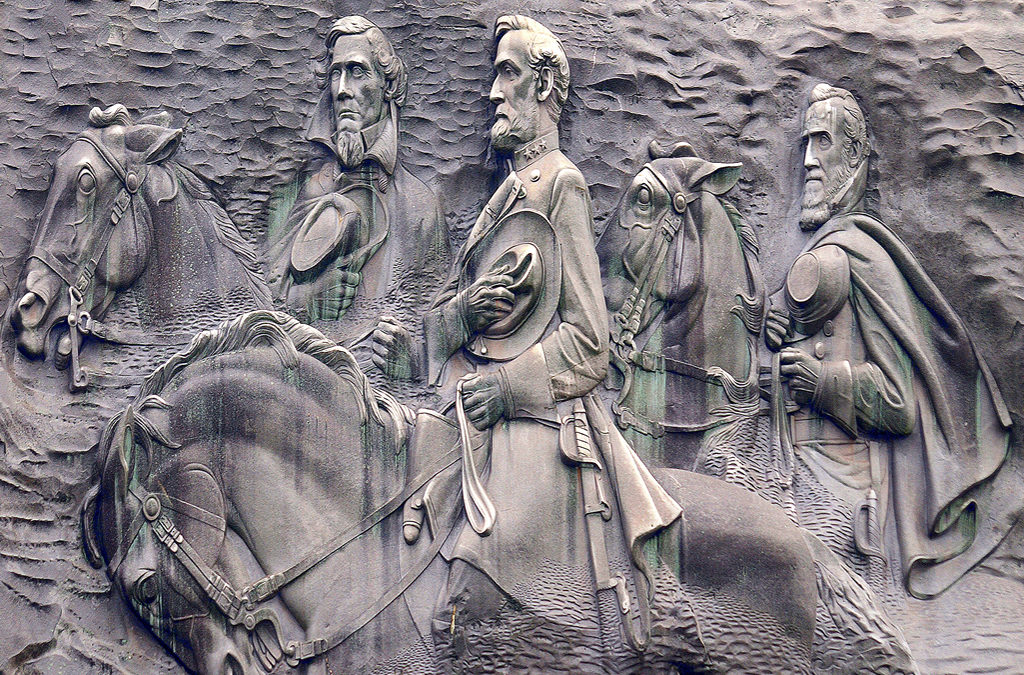 Robert E. Lee, Stonewall Jackson, and Jefferson Davis straddle their horses in a carving 400 feet above Stone Mountain, home to laser light shows, kiddy rides, and a population that is 75 percent black.

Following the violence at a white supremacist rally in Charlottesville, Virginia, in August 2017, rallying cries to bring the famous Confederate monument crashing down have intensified. Georgia House Minority Leader and Democratic candidate for governor Stacey Abrams has called for its removal. The Georgia chapter of the NAACP has voiced its support for the removal of all Confederate symbols from government property and called Stone Mountain a “continued celebration” of the Confederacy. Atlanta chapter president Richard Rose said that the monument was “erected to demonstrate and celebrate white supremacy.”

Here’s the truth on the left: Some memorials were built to celebrate white supremacy.

Most Confederate memorials were not built immediately after the Civil War. There were several spikes in their construction, all conveniently occurring around the time of landmark civil rights events. The first spike was in the early 1900s, when the NAACP was founded; but the most substantial spikes didn’t occur until the 1950s and 60s at the height of the Civil Rights Era, one hundred years after soldiers died fighting for the Confederacy.

The Stone Mountain monument was built with racist intent. In 1915, Stone Mountain was the site of cross-burnings and the rebirth of the Ku Klux Klan. According to The Atlanta Journal Constitution’s Jay Bookman: “The man who donated his land to the project was head of the national KKK. The original sculptor was a KKK member. The head of the local chapter of the Daughters of the Confederacy, the woman who helped envision the project, wanted it to serve as an explicit monument to the Klan.”

Now, here is the truth on the right: History matters.

In a press conference in August, President Trump posed the question: Where does it end? If we’re going to tear down a statue of someone like Lee, who was arguably fighting more for his love of Virginia than for his love of slavery, who’s next? Washington and Jefferson were slave owners. Why shouldn’t we tear down their statues?

The left immediately denounced his statement as insane. Of course, the next day an article at Vice News called for the destruction of Mount Rushmore. In a PBS interview, Al Sharpton called for the abandonment of the Jefferson Memorial in Washington, D.C. Ironically, the students at the school Jefferson founded, the University of Virginia, have long been calling for the removal of his statue on campus, calling it an “emblem of white supremacy.” The weekend following Charlottesville, the statue was vandalized with red paint.

There is a rational argument to moving the intentionally and explicitly racist memorials to museums. But you can’t do that with the monument on Stone Mountain. It’s the largest high-relief sculpture in the world. It sits 400 feet above the ground and is 42 feet deep. The answer is not that easy. You really only have three options: leave it alone, alter it, or dynamite it into oblivion.

“If it has become an embarrassment, good,” Bookman writes at the AJC. “Let it serve us always as an embarrassment, and as a reminder of the false stories that we can tell ourselves. Sandblasting it away would be an act of cosmetic surgery on our history when it still has much to teach us.”

The two truths don’t have to conflict with one another. Truth doesn’t conflict with truth. As long as we don’t foolishly repeat history by polarizing the nation along racial lines, history is nothing to fear. It is something to remember—sometimes with pride and sometimes with sorrow.

Yes, there is a racist history to Stone Mountain, but even if the Confederate memorial were wiped from the mountain, it could never be wiped from history. Sandblasting away a memorial to the past wouldn’t erase the past. It would only shield our eyes from truth.

This piece was originally published at The Arch Conservative in October, 2017.