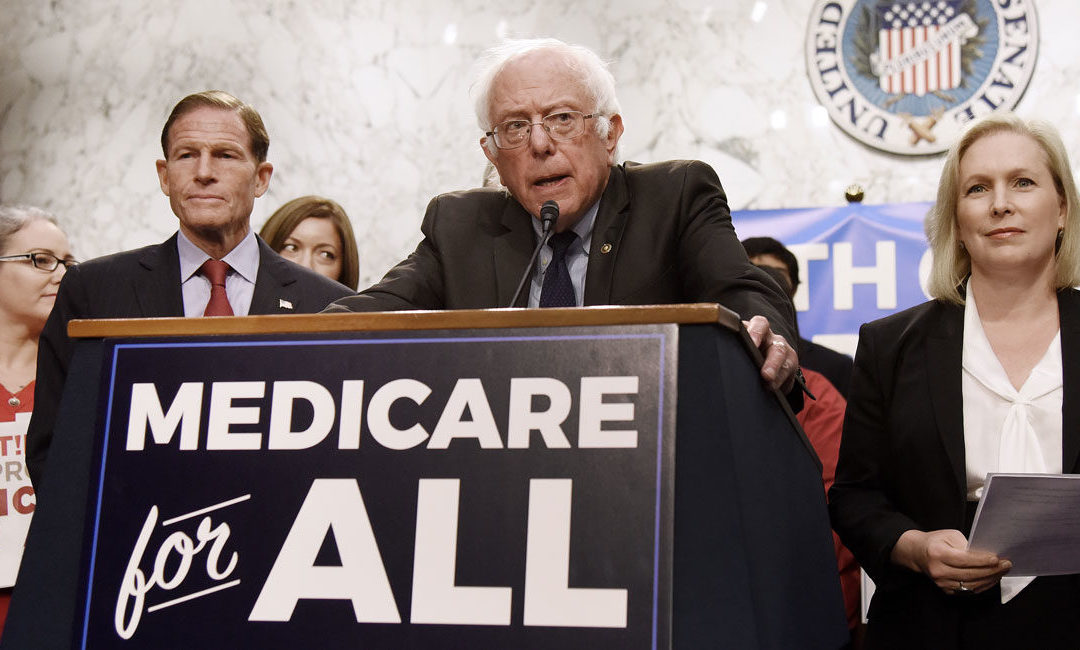 Let me tell you a sad story.

My grandmother had severe rheumatoid arthritis. She was bed-ridden for as long as I can remember, and the only way she could move was through someone lifting her out of her bed and into a wheelchair. Her arms and hands were so crippled that she couldn’t feed herself or even scratch her own face, and in the end of her life, she only had one leg and often experienced ghost pains, which she described as a knife in the foot that no longer existed.

When she got divorced, she was no longer on her husband’s health insurance plan. She had a “pre-existing condition.” She was on a fixed income but did not qualify for Medicaid. Her healthcare costs were astronomical until she finally qualified for Medicare. My grandmother’s full story was one of the most tragic I’ve ever heard.

Now, why am I telling you this? I could easily use that story as an argument to expand Medicare/Medicaid. I could also use it to beat you over the head with an argument for a single-payer healthcare system, like the United Kingdom and Canada. And I could certainly claim that anyone who opposes my policies simply must hate my grandmother.

But I’m not going to do that.

Why, through empathy, of course!

This analogy occurred to me while waiting in a really long line, on my feet, in the cold, for five hours. People would join their friends in front of us. A few people came up to us and told us their stories and why they were late. We felt bad for them, so we let them hop in line with us, thinking we were just being nice. We were almost to the door at the end of the five-hour wait when the event filled up. We did not get inside, and neither did the people behind us.

Empathy – however wonderful it can be in your personal life and on a social level – is a really bad way to form policy. Why? Because government requires a sacrifice (i.e. the people behind you in line). Free markets, on the other hand, do not. The only way to succeed in a true free market is to provide your neighbor with a good or service that he wants or needs. Government, however, can quite literally only operate at your expense and can only accomplish its goals through force. The real kicker? It doesn’t care what it spends…because it’s your money.

What the Politicians Don’t Tell You

So, what kind of “sacrifice” are we talking?

Healthcare is a right…right? Which means the government should be able to provide it for you, no questions asked…right? Just like it provides the right to bear arms…right? It’s a right that’s right up there in the Bill of Rights with the right to free speech…right?

First, don’t let politicians like Bernie Sanders or Elizabeth Warren tell you that it’s possible to have high-quality, low-cost, government-provided, universal healthcare. The politicians, from Bernie Sanders to Donald Trump, don’t tell you that in order to provide everybody with health insurance, they will have to sacrifice quality, cost, and freedom.

What they don’t tell you is that Medicaid expansion has no impact on life expectancy.

What they don’t tell you is that your premiums – as, say, a healthy man from Alaska who bought health insurance just in case something happened – will rise by 200 percent. (But don’t worry – the price hike will be offset by a subsidy!)

Of course, what they don’t tell you is that demand-side subsidies to people with incomes three times the poverty rate are among the many reasons insurance costs artificially rise in the first place.

What they don’t tell you is that 75 percent of clinical trials are paid for by private companies.

What they don’t tell you is that one third of doctors won’t accept Medicaid.

What they don’t tell you is that the UK Department of Health is considering requiring five years of mandatory service to the National Health Service after graduation to deal with shortages of doctors. (This is called involuntary servitude, by the way.)

What they don’t tell you is that in the UK, if you make $45,000 or more a year, you pay a minimum 40 percent income tax rate in order to fund the NHS.

What they don’t tell you is that in Quebec, a man had to challenge the courts to defend his actualright to voluntarily pay for a hip replacement in a private market.

What they don’t tell you is that European “human rights” courts have prohibited the parents of 10-month old Charlie Gard from taking their own child to the United States for potential life-saving surgery with money given to them through private charity, claiming little Charlie has a right to “die with dignity.”

Is there a cure for this government-mandated disease?

Sure, and it’s simple.

Rollback tax burdens on insurance companies. Open up competition and your ability to shop across state lines. Stop forcing insurers, at the point of a gun, to provide certain benefits. Most importantly of all, encourage medical innovation.

Tax burdens on insurance companies are part the reason we consumers incur higher costs in the first place. Forcing insurers to comply with certain regulations and provide specific benefits stymies competition and pushes smaller insurers out of the market, creating government-regulated monopolies.

Medical advancement is the single most important factor of all. Think about this beautiful fact: Even wheelchairs were once a new invention.

If you stunt the creation of wealth, you stunt the innovation of products, services, medicines and life-changing, life-saving technology. Maybe today, only a select few top one-percenters can afford this special new cancer treatment. But as it enters the marketplace and innovators compete to lower prices and increase quality, it will become available for the vast, vast majority of Americans who want it tomorrow. This free-market process happened with TVs, laptops, iPhones, air conditioning, even Lasik eye surgery (which is largely unregulated). Luxuries, not even dreamed of as possible by the richest of the rich a hundred years ago, are deemed necessities today, and necessities, the politicians deem “rights.”

You want to find the cure for cancer? Maybe there’s a cure for my grandmother’s rheumatoid arthritis out there. Maybe one day in the future, if we don’t keeping screwing up our healthcare system, no one will ever get as sick as my grandmother did to begin with. Maybe people won’t die of cancer.

If a cure exists, you will never find it by redistributing the wealth that exists today. The cure lies out there somewhere. But it can only be found through innovation, and large-scale innovation is only possible in a free market.

Who Gets to Cut in Line?

Bob forgot to leave early before traffic got bad. Bob got stuck in traffic. Then Bob’s car ran out of gas. Bob stopped at a gas station and filled it up, but then someone hit Bob’s car in the parking lot and Bob had to call the police. You felt Bob’s pain, so you let him cut you in line. Never mind that Susy, the woman right behind you, had all the same things happen to her, but Susy decided to leave a few minutes early…just in case something happened.

Did you do the right thing by letting Bob cut Susy? Well, you don’t know Susy’s story, so you feel like you did. And that’s all that matters…right?

I want the risk Bob took in not leaving with enough time to spare to have consequences. If it doesn’t have consequences, then it’s not really a risk, and why shouldn’t Bob do it again, and what should stop more people from following Bob’s lead?

In the same respect, if you’re forty years old and were healthy up to that point, but you neglected to buy even catastrophic health insurance, I want there to be a consequence for you – not because I want you to die, but because I don’t want other people to make the same bad decisions you did. I want to incentivize people to make the right ones.

The real question is, how can we find new ways to innovate, get more people through the door, and simply, make the show go on longer? How can we lower prices, increase competition, make health insurance as cheaply and readily available as TVs, which 96 percent of Americans have in their homes?

But I’m not going to do that.

I wish my grandmother could have afforded to pay her own healthcare costs. In fact, I want it to one day be so cheap and widely available that people like her can pay out of pocket. I want Charlie Gard’s parents to have some say in their own child’s life. I want sick people with sad stories like my grandmother’s to be able to buy medicine or insurance as easily as they buy iPhones.

The healthcare disease is tricky, but the cure is simple. I want to own my own life, and I want you to own yours.